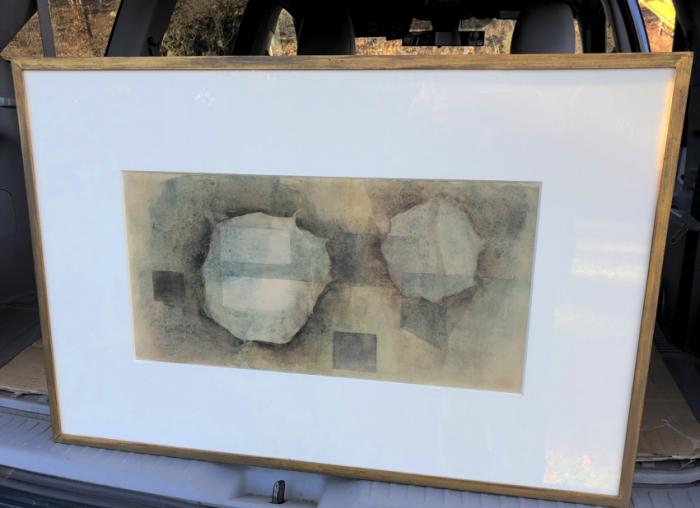 Samson Flexor abstract watercolor c1955, signed lower left. The original frame measures 20 x 36 inches. The image measures 19.5 x 9.5 inches. Samson Flexor (1907-1971) was born in Soroca, Moldova, to a wealthy Jewish family. His father, Modest Flexor was known throughout the province as an agronomist, a landowner and one of the richest men. His mother Marie-Georgette (nae Kleiner) was born in France. Samson was educated at a Sorocan private school, the Odessa Art School, and school in Bucharest, where the family relocated. In 1922-1924 he studied at the Academie Royale des Beaux-Arts in Brussels, and afterwards in the acole Nationale des Beaux-Arts in Paris with Lucien Simon, and also attended lectures on art history at the Sorbonne University. In 1926 he studied fresco technique in private Academie Ranson. In the late 1920s his parents also settled in Paris, and in 1929 the family received French citizenship. After the war, Flexor did not remain in France. In 1946 he first visited Brazil, and in the spring of 1948 he left France for good and settled in Sao Paulo. After moving to Brazil, realism completely disappeared from his works and all his further work was abstract. In 1951 Flexor opened the first abstractionist studio in Brazil called Atelier-Abstracto, where the exhibited works are united around him a group of Brazilian contemporary abstract painters Jacques Douchez, Norberto Nicola, Leopoldo Raimo, Alberto Teixeira, Wega Nery, Anasia Pacheco e Chaves, Charlotta Adlerova, Ernestina Karman, Iracema Arditi and Gisela Eichbaum. In 1961 Flexor opened a second abstractionist studio. In the last years of his life Flexor regularly exhibited in Brazil.