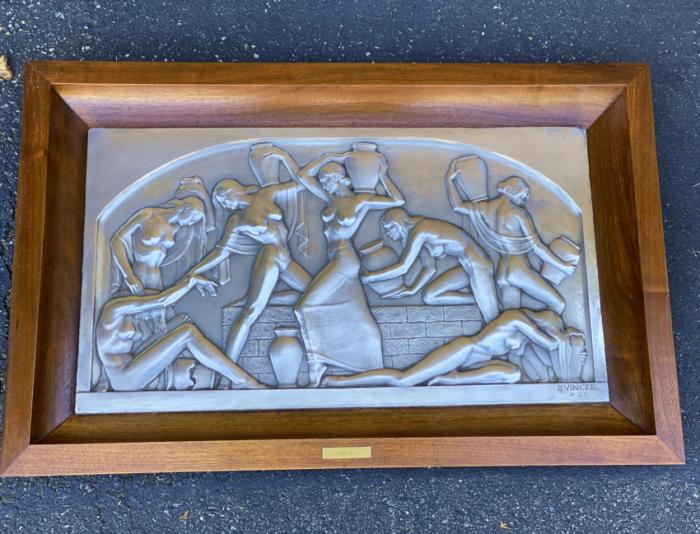 This bas relief sculpture titled "Danaides" was made from a single sheet of pure silver, backed and framed with solid walnut. We estimate there are approximately 60 to 70 ounces or more of .999 silver in this panel. It is number 26 of a limited edition of 75 designed by Paul Vincze and produced for Vito Rossi by the Franklin Mint on February 14, 1969. The solid walnut frame measures 32" wide x 21" high x 1.75" deep, and the sculpture measures 14.5" high x 25" wide x .5 " deep. Paul Vincze, medallist: born Galgagyork, Hungary on 15 August 1907; married 1958 Emilienne Chauzeix; died Magagnosc, France on 5 March 1994. Paul Vincze was a prolific artist and an internationally acclaimed medallist. He excelled at portraiture and his work reflects his sensitive approach to the subject, his mature work achieving an almost Renaissance quality. His sitters were many and varied, including Sir Winston Churchill, President Harry Truman, Pope Paul VI, Yehudi Menuhin, Prince Karim Aga Khan and J B Priestley. He studied at the State School of Arts and Crafts at Budapest and later under Ede Telcs, an extremely talented portraitist; Vincze absorbed his instruction with enthusiasm and, in later years, expressed the opinion that Telcs 'was the greatest medallist of this generation'. From 1935 to 1937 Vincze studied in Rome and then returned to his native country. Nazi persecution forced him to flee, however, and in 1938 he came to England, setting up his studio in London. He lived there for the rest of his life except for annual visits to his house in the south of France. He became a British subject in 1948.He was the recipient of several awards including a Premio Especial at the International Exhibition, Madrid, in 1951, a silver medal at the Paris Salon of 1964 and the first gold medal of the American Numismatic Association, 1966. This Bio was taken from http://www.independent.co.uk/news/people/obituary-paul-vincze-1367203.html