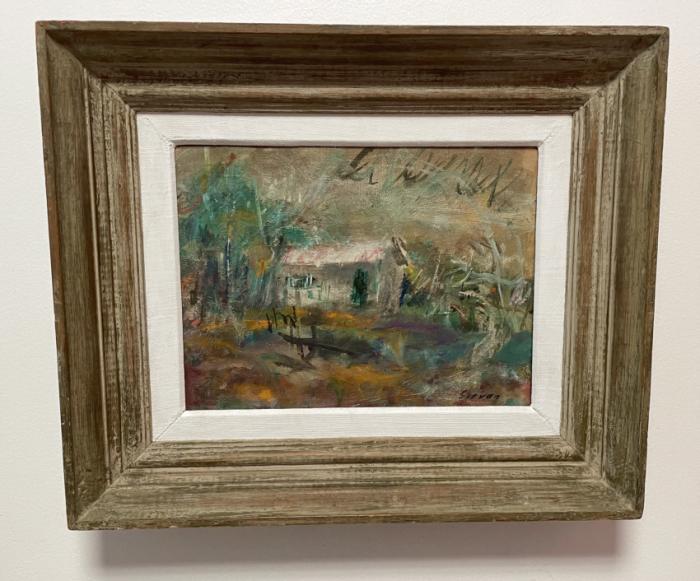 Vintage expressionist style oil painting on artist board titled "Country House" by Maurice Sievan 1953. Wonderful original estate condition. The painting measures 9 x 12 inches and the frame measures 18 x 15 inches. Signed lower right, with notations on reverse. Bio from ASKART.com: Maurice Sievan (1898-1981). In 1940 painter Maurice Sievan and his wife, Lee Culik Sievan (1907-1990), an emerging photographer, moved from a Manhattan apartment into a new single-family home located in Flushing, Queens. The transition introduced Sievan to a pictorial theme that would preoccupy him for more than a decade: the uncelebrated landscapes of this outlying residential borough of New York City, typified by tree-lined streets, low-rise housing, nondescript shopping areas, and ubiquitous automobile traffic. These moody and curiously depopulated pictures were the outcome of sketches and occasional photographs recorded by the couple from a battered Chevrolet that Sievan had improvised as a mobile studio. "Suburbia #5", an unspecified Flushing streetscape dating from the mid-1940s, bears out the reputation - albeit unsought - that Sievan would acquire as the "poet laureate of suburbia". Sievan's Expressionist landscapes represented only one chapter in a long career marked by diverse stylistic adventures. Arriving in Williamsburg, Brooklyn, from the Ukraine in 1906, Sievan became a U.S. citizen in 1913, the same year he left school for an apprentice job with a local lithographer. He subsequently took courses at the National Academy of Design, studying under the realist painter Leon Kroll.