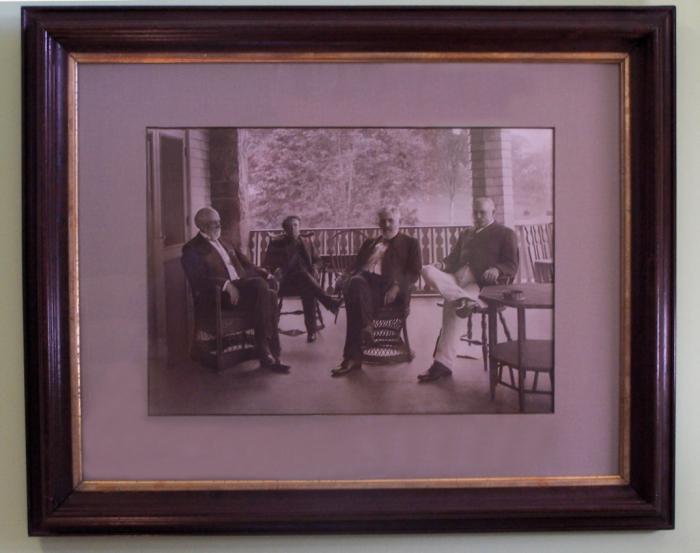 The Senate Four (left to right): Orville Platt, John Spooner, William Allison, and Nelson Aldrich, meet informally at Aldrich’s Newport, Rhode Island, estate in 1903. There is another copy of this original photograph in the US Capitol Visitor Center Exhibition Hall, History of Congress and the Capitol. Exhibition title is Seniority and Power: The Senate Four 1897-1909. After the Civil War, Senate activity shifted from individuals to groups of members formed into committees. This gave tremendous power to important committee chairmen. By 1900, four senators known as the "Senate Four" dominated the most important Senate committees: Nelson Aldrich of Rhode Island (Finance); William Allison of Iowa (Appropriations); John C. Spooner of Wisconsin (Rules); and Orville Platt of Connecticut (Judiciary). These close friends met regularly to share information and plan strategy. A newspaper reporter of the time, February 19, 1903, wrote "These four men can block and defeat anything that the president or the House may desire." Their links to special interests, and their resistance to policies favored by President Theodore Roosevelt, provoked public concerns that led to calls for reform, including a constitutional amendment for direct election of senators. The original black walnut frame with gold leaf insert measures 26.25 wide x 21.25 inches high x 1.75 inches deep. The image measures 12 x 17 inches. Excellent condition, no fading. Photographed under original old glass. Newly matted with archival backing. This is a rare unsigned photograph. We have not yet identified the photographer.