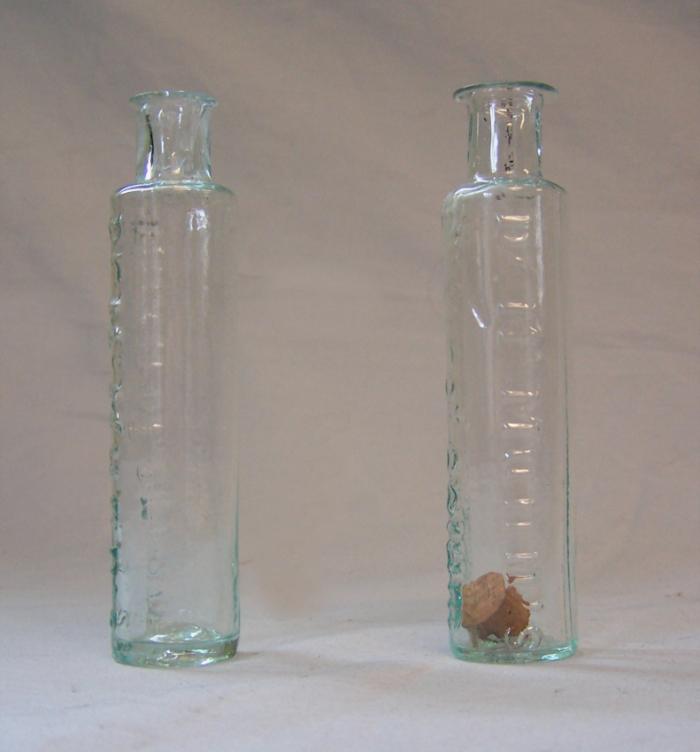 Rare pair of early Dr. McMunn's Elixir of Opium hand blown glass medicine bottles circa 1830. Dr. McMunn’s Elixir of Opium was first formulated in the mid 1830's by Dr. John B. McMunn. The product became popular in the United States once the A. B. & D. Sands drug company bought the recipe in 1841. Soon after, advertisements for the product flooded newspapers and medical journals, many guaranteeing that McMunn’s was not habit-forming. Yet, bottles of the narcotic-laced formula were labeled as the “Pure and Essential Extract of the Native Drug”, and the preparation was said to be “Greatly Superior to Morphine.” Touted as a cure for a host of ailments, including the relief of “convulsions and spasmodic action,” as well as “pain and irritation, nervous excitement and morbid irritability of body and mind,” McMunn’s potent remedy was among the countless pharmaceutical preparations containing opiates and widely available to the 19th-century consumer. A survey of 10,000 prescriptions filled by thirty-five Boston drugstores in 1888 revealed that 1,481 of them contained opiates. Among prescriptions refilled three or more times, 78 percent contained opiates. Bio obtained from Odyssey's Virtual Museum.