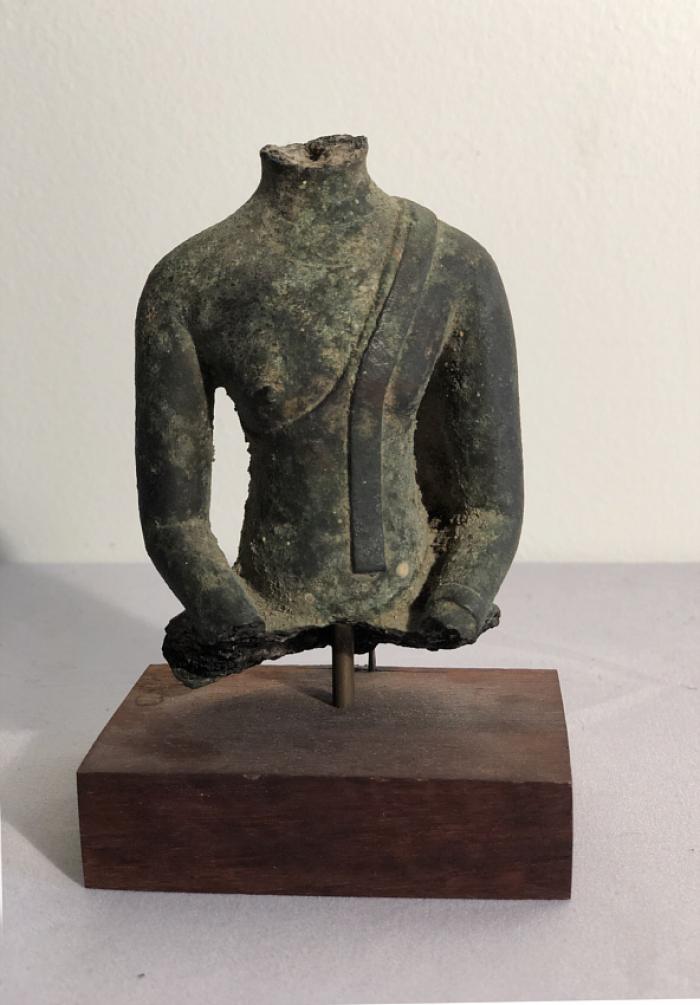 Bronze torso of Buddha, Thailand circa 1335 to 1550, Ayudthya period. measures 3.75 " high, 5 inches with wood base. Purchased in 1962 for $25 from Edgar Mayhew. Appraised in 1992 buy Harmer Rooke NY for $200-400. The Ayutthaya Kingdom Thai pronunciation: [ʔajúttʰajaː]; also spelled Ayudhya or Ayodhaya) was a Siamese kingdom that existed from 1351 to 1767. Ayutthaya was friendly towards foreign traders, including the Chinese, Vietnamese, Portuguese, Indians, Japanese, Koreans, Persians, and later the Spaniards, Dutch, English, and French, permitting them to set up villages outside the walls of the capital, also called Ayutthaya. In the 16th century, it was described by foreign traders as one of the biggest and wealthiest cities in the East. The court of King Narai (1656–1688) had strong links with that of King Louis XIV of France, whose ambassadors compared the city in size and wealth to Paris. By 1550, the kingdom's vassals included some city-states in the Malay Peninsula, Sukhothai, Lan Na and parts of Burma and Cambodia. This part of the kingdom's history is sometimes referred to as "The Ayutthayan Empire".