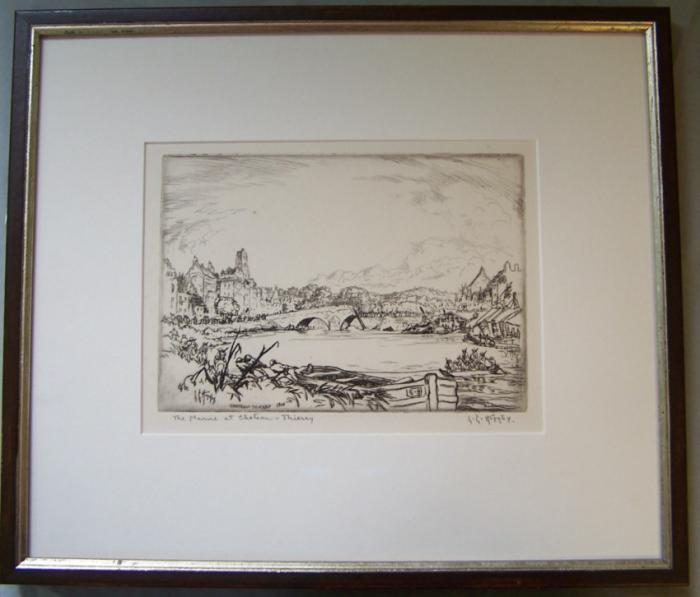 The Marne Chateau Thierry drypoint etching Lester Hornby c1918. The viewable print measures 6 x 8.25 inches, with a 13.25 x 15.5 inches frame. Professionally framed and mated. Lester George Hornby was born in Massachusetts and received his early training in fine arts at the Rhode Island School of Design and The Art Students League in New York. Hornby's graphic output includes about 330 etchings, drypoints, color aquatints, and lithographs, done from 1905 through the 1940's. He used different sands and powdered resins to obtain various effects in the shadows and lines of his finished product. Also, his wiping techniques or retroussage in printing gave him excellent results in the large areas of light and shadows, which were prominent in so many of his plates. After the conclusion of World War 1, Hornby, became less intrigued with dramatic tones and atmospheric effects and concentrated more on achieving effect through the line itself. During the 1940's he became interested in lithography and produced some strong images such as, "Night Watch," "The Plowman," and "Palais de Justice La Conciergerie." Never an equal to his earlier etchings, they did however, evoke a mystique through shadows and atmospheric effect. It should be mentioned that edition sizes are only approximate, as Hornby may have intended to print in the edition sizes noted, but usually printed in smaller numbers. Reference: Lester G.Hornby, Painter-Etcher. by Peter Hastings Falk, Madison, Connecticut, 1983. Bio from Egon and Joan Teichert Fine Prints http://www.eteichertfineprints.com/