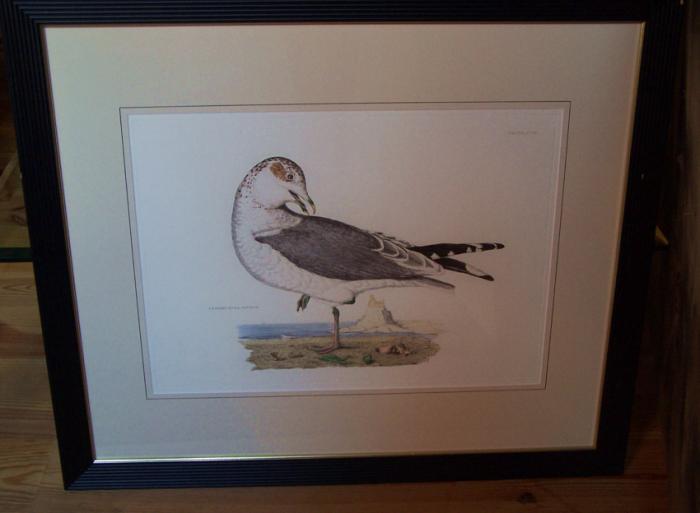 Common Gull in Winter Plumage hand colored print plate XCIIIC 1841-1846. Etched to copper plate by the artist, and engraved and hand colored by W H Lizars of Edinburgh. Prideaux John Selby (23 July 1788 – 27 March 1867) was born in Alnwick, Northumberland, England, the son of a wealthy landowner. He studied at University College, Oxford. He married Lewis Tabitha Mitford and they had three daughters. Selby is best known for his bird folio Illustrations of British Ornithology (1821–1834), the first set of life-sized illustrations of British birds. He also wrote Illustrations of Ornithology with William Jardine and A History of British Forest-trees (1842). Many of the illustrations in his works were drawn from specimens in his collection. In addition to the above works he contributed to Jardine's Naturalist's Library the volumes on the Pigeons (1835) and the Parrots (1836), the latter illustrated by Edward Lear. He was for some time one of the editors of the Magazine of Zoology and Botany. His collections were sold in 1885 and became dispersed. The South African birds collected by Andrew Smith went to the Zoology Museum of the University of Cambridge. See: Mullens; Swann. (1918). A Bibliography of British Ornithology. Raine, Revd. James (1852). The History and Antiquities of North Durham. page 338 Jackson, Christine E. (2004). Oxford Dictionary of National Biography. The print measures 22.25 x 16.25 inches and is in a beautiful first quality solid wood museum quality frame with gold insert that measures 33.75 x 29.25 inches. This piece hung in the board room of the Atlantic Golf Club. Excellent condition. This item is on display in our gallery at OLD SAYBROOK ANTIQUES CENTER and can be seen by visiting 756 MIDDLESEX AVE OLD SAYBROOK, CT 06475. Open Daily 10am-4pm www.OldSaybrookAntiquesCenter.com