Entire inventory 35% off listed price for the month of November!

Etching of General Dalrymple by Dighton 1804 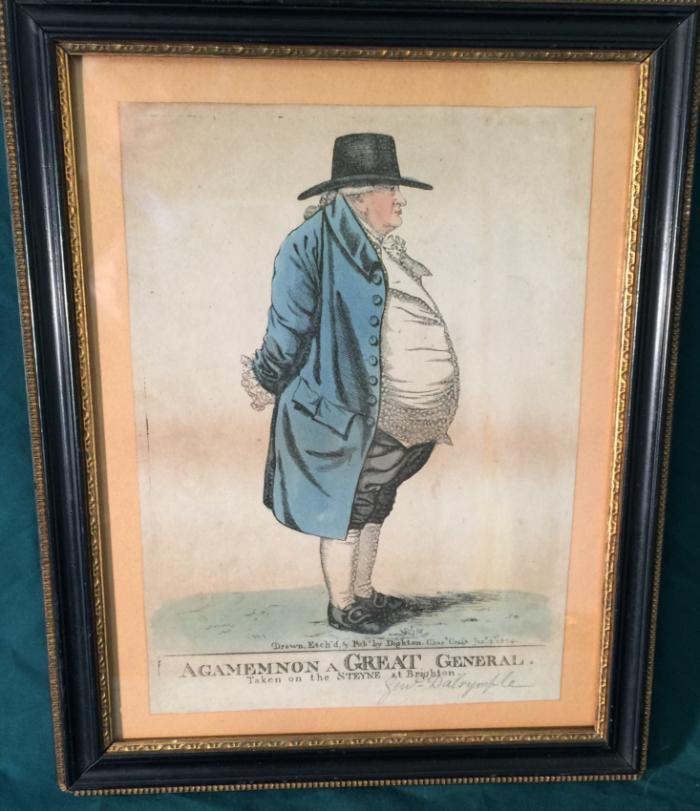 General William Dalrymple, 1735-1807, Col. of the 47th Foot and Lt.-Governor of Chelsea Hospital, father of the 7th Earl of Stair. Below the title: 'Taken on the Steyne at Brighton.'The original frame measures 12 x 15 inches and the print itself 8.5 x 11.5 inches. Laid down on paper. A very obese man stands in profile to the right., his hands behind him with a meditative expression. He wears old-fashioned dress, with round, broad-brimmed hat, and buckled shoes. 1 January 1804 Drawn by and published by Robert Dighton hand-coloured etching, published London: Published by Robert Dighton, Charg. Cross, Engraving with added hand-colour. Printed on watermarked laid paper. Name of subjects inscribed in contemporary script on bottom of image. pretty perfectHe was educated at Glasgow University 1749. In 1752 he joined the British Army, becoming an ensign in the 52nd Regiment of Foot. He became a lieutenant in 1759 and a captain (in the 91st Regiment of Foot) from 1760. By 1762 he was a major, and served in the campaign against the Spanish invasion of Portugal (1762). After a period on half pay in 1763, he was appointed to the 14th Regiment of Foot in 1764. He was promoted to lieutenant colonel in 1765. Between 1766 and 1768, Dalrymple was in Halifax, Nova Scotia. In 1768, he was placed in command of a detachment of two regiments sent to Boston, Massachusetts, to support embattled royal officials who were having trouble enforcing the unpopular Townshend Acts. Troops in his command (although he was not directly involved) were involved in the Boston Massacre, in which five civilians were killed when those troops fired into a crowd. Amid continuing hostility, Dalrymple acceded to the request of Acting Governor Thomas Hutchinson to remove his troops to Castle William, an island fortress in Boston harbour. In 1772-1773 Dalrymple received a local promotion to major general and commanded a force which captured the West Indian island of St Vincent. He returned to Britain in 1773. He continued to be in touch with his American Loyalist friends in Boston. He was saddened but not surprised by the Boston Tea Party. After the American War of Independence broke out in 1775, Dalrymple returned to North America. He served as quartermaster general 1779-1783. He was promoted to brigadier general (1779) and then major general (1782). After the end of the war Dalrymple was attacked for alleged corruption, but General William Howe stoutly defended his former subordinate and the allegations were dropped. Dalrymple then went into politics. He represented Wigtown Burghs in the British House of Commons from 1784 to 1790. Between 1796 and 1798 he sat for Duleek in the Irish House of Commons. Dalrymple was promoted to lieutenant general 1793 and general 1798.