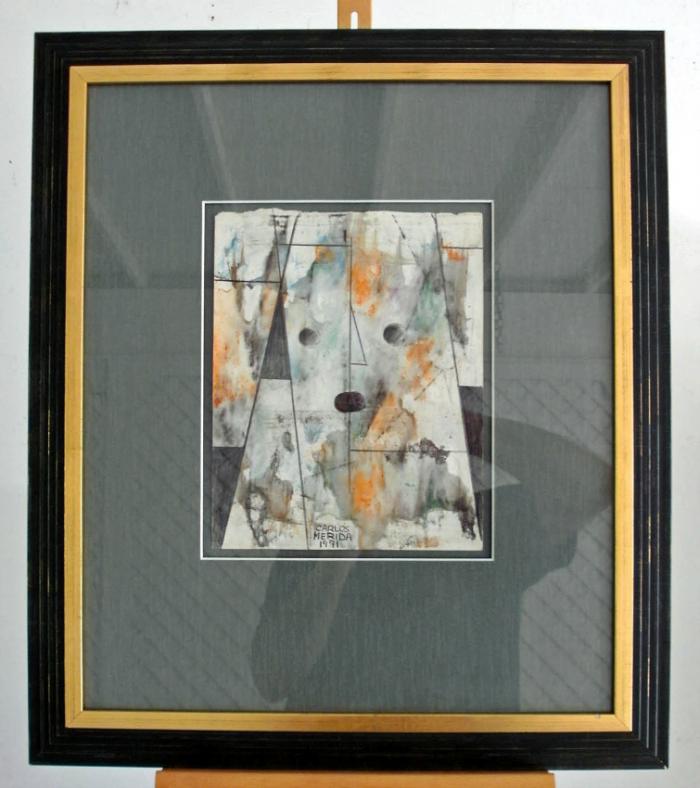 Carlos Merida (1891-1984) geometric abstract watercolor on paper, signed and dated 1971, in a custom ebonized frame with a gold fillet. Mérida studied at the Instituto de Artes y Artesanias in Guatemala City. In 1910 he accompanied his friend Valenti to Paris, where he met Picasso. However just 4 months after arriving, Valenti shot himself dead, an event that greatly affected Mérida. After traveling through Europe, he returned to Guatemala in 1914 and had his first exhibition. In 1919 he moved to México and married Dalillla Gálvez, but because the marriage was against the wishes of her family, they made their home in México where he became active in the Mexican mural painting school. In 1922 Mérida worked with Diego Rivera to paint the murals of the Anfiteatro Bolivar in Mexico City, and together with Rivera, Orozco, and Siqueiros founded the Union of Workers, Technicians, Painters and Sculptors. His first mural as a solo artist was his commission in 1923 to paint the Children's Library of the Ministry of Public Education ("Little Red Riding Hood and the Four Elements"). In 1927, after another stint in Paris familiarizing himself with Paul Klee & Joan Miró, he abandoned his figurative style to become one of México's first non-figurative artists. On his return from Paris in 1929, he was named the director of the gallery of Mexico's National Theatre. His later works formed a link to the Mayan world with geometric elements. He integrated into his paintings indigenous "papel amate" (bark wood paper). His mural for the Presidente Juárez building (1952) depicted a series of Mexican creation myths. 1940 saw his participation in the International Surrealist Exhibition that took place in Mexico and in 1942 he went to teach at the North Texas State Teachers College in Denton (now the University of North Texas). In 1949 Mérida began to research the integration of different arts and from the 1950s onwards his art began to show a Constructivist tone, which was demonstrated in murals and mosaics (often using materials like glass) such as for the Alianza Insurance building in Mexico City (1953) and the City Hall of Guatemala City (1956). His later career also saw Mérida dividing his time between commissions in Mexico and in his native Guatemala, with occasional forays elsewhere (e.g. a glass wall in the Civic Center in San Antonio, Texas). As well as installation art like murals and mosaics, Mérida continued to paint on canvas and also to produce silk-screens and lithographs, principal among which are albums such as Tres Motivos (1936) and Trajes Indígenas de Guatemala. Dimensions, framed; 22.25" H x 19.25" W. Approximate artwork dimensions (all showing): 10" x 8".