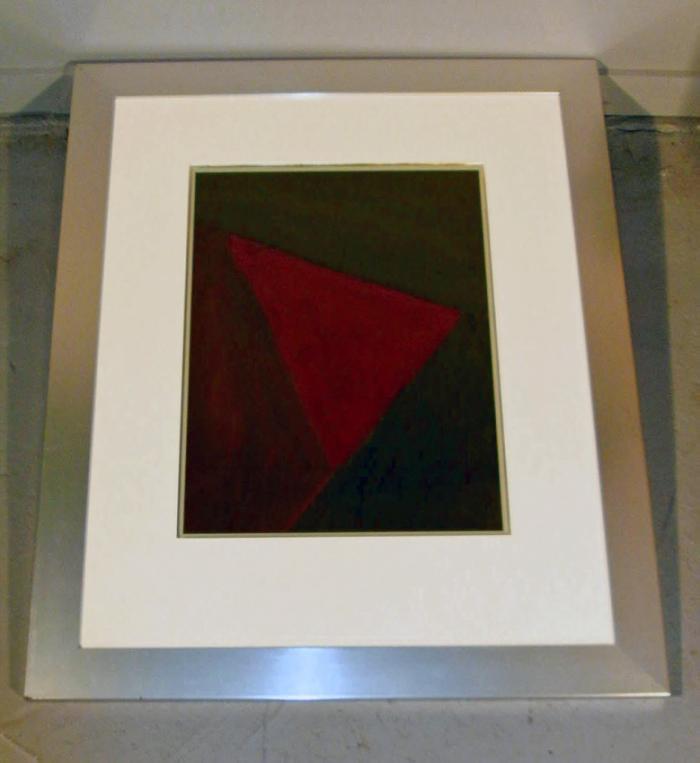 Striking geometric gouache on paper by Lloyd R. Ney (born 1893, died 1964), one of America's leading 20th century modernists and noted PAFA artist (New Hope, PA). Signed and dated 1963 at lower right. Ney was born in Friedenburg, PA, in 1893. He studied at the PA Mus. Sch. of Industrial Art and at the PA Academy of Fine Arts in Philadelphia. In 1918 he won a Cresson Fellowship to study in Europe. He traveled to France where he studied and painted in Paris among the European modernist community. He lived at the Hotel de Versailles in Montparnasse. During this period Ney created his major work, "The Drinkers." Later he would write extensively about the process of developing this work and the transforming experience of integrating the Modernist ideal he had witnessed in Paris. After returning to the US, Ney settled in the art community of New Hope, PA. He was among a group of artist known as the "Independents," who challenged the traditional and impressionistic subject matter of regional artists. They formed a new exhibition group. Ney was part of the "New Hope Modernist School" for most of his life as a painter. During the period of the W.P.A. in the early 1940s, Ney was commissioned to paint a mural for the New London, OH, post office. The documentation of the controversy over this mural and its modernist style was the subject of numerous letters between Ney and the Director of the Federal Arts Project. It was finally reconciled when the citizens of New London, petitioned Washington to allow Ney to execute the first abstract mural in a government post office. The original cartoon for this mural is in the collection of the Michener Mus. of Art, New Hope, PA. The documents over this controversy are in the Archives of American Art, Smithsonian Institution in Washington D.C. along with much of Lloyd Ney's original writing and correspondence, including the original manuscript, Art Appreciation For The People, How To Look At Paintings, What Constitutes A Work Of Art, 1949. Ney's career included 15 years of exhibitions at the Solomon R. Guggenheim Museum, NYC, and 3 of his paintings are in the museum's permanent collection. His work was exhibited in France, Germany, Switzerland, and Italy during his lifetime. Posthumously, the James A. Michener Museum in Doylestown, PA, mounted a major exhibition of the "New Hope Modernists," featuring Ney and his contemporaries, C. F. Ramsey, Charles Rosen, B.J.O. Nordfeldt, Lee Gatch and R.A.D. Miller. Ney's prolific career encompassed over 50 years, painting in Paris, Capri, Key West, Martinique, Mexico and New Hope, PA. Hope Modernists," featuring Ney and his contemporaries, C. F. Ramsey, Charles Rosen, B.J.O. Nordfeldt, Lee Gatch and R.A.D. Miller. He died in 1964. Dimensions overall: 33.25" W x 40" H.